Hotcakes are a big deal in my family. One of the first things I remember cooking is hotcakes with my Grandpa. Visiting my Grandparents usually meant stuffing yourself silly with 4 inch hotcakes, buttered and soaked in cane syrup that comes in what looks like a paint can. He was smart, Grandpa, he'd keep some cane syrup blended with some Aunt Jemima put a lil dollup on top, and a couple of days later you were reaching for the full strength stuff your own self.
I try to make hotcakes once a week at least myself, usually on Saturdays when I don't have to be anywhere until noon, if not then, Sunday is the day. Sometimes it doesn't work out, and I miss a week, but I try.
I made some regular hotcakes this Saturday, then got to looking at who was left to feed, and what I had to work with. I decided that since it was just my wife and I left to feed, I would try something innovative. I had some apples, and wondered if I could make something special. I sliced them thin, and covered them in cinnamon and sugar, we keep some mixed up and handy for a quick 'cinnamon toast' snack. Then I decided to fry the apples in butter in the official hotcake pan of the Hoyt House:
﻿﻿
﻿﻿  I use a black iron flat pan, made in America, and in my possession since my college days. Cooking hotcakes on black iron is the right way to do it, no teflon, stainless, or anything else will do. The key to cooking anything on iron is using lots of butter, and keeping the temp low. The iron is a massive heat sink, and helps even out the cooking, the draw back being, it takes a while to warm up, and doesn't react as quickly as stainless to temperature changes. It forces you to slow down and think about what you are cooking. It's not a bad thing, but it is a thing.  Beware of things. My idea was simple, fry apples, apply batter, and treat as a normal hotcake.
My griddle is a size that means I normally make 3 hotcakes about 4-5 inches in diameter. I knew the apples would cook up well if sliced thin, and kept in large pieces, as is illustrated in the pictures. I gathered the apples together in the center of the pan, and poured the batter on top. When gathering the apples, I made sure to keep the apples from touching each other, seemed like it was a good idea to make sure batter could get around the apple. I did discover though, that the batter would push the apples around if you weren't careful. Next time I may fry the apples, let them cool, then put them in the batter to cook. I may also try cutting the apples some more. 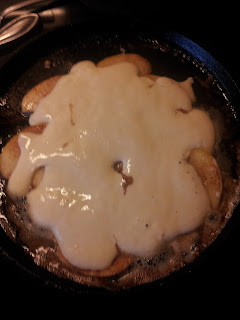 This is what yummy looks like about five minutes before serving! You can kind of see in this pic how the apples get pushed out as the batter comes down. When I was taught how to make hotcakes, I was taught that you wait for the bubbles to come up and when they are done popping, the hotcake is ready to flip. That works when you are using normal milk for your batter, but lately, we've been cutting out the milk from our diet. Now I have made my hotcake batter with water before... you will do about anything to fill your belly when you are broke and in college... Doing so by choice is just plain wrong. I decided that while orange juice was a great choice for cereal, it, like water, was also a poor choice for hotcake batter. We've supplanted our milk with almond milk, and when we first started doing that, I decided that I would try to make my hotcakes with almond milk. That is a winning choice, but it does pose some challenges.  First of all, almond milk has a slightly different flavor than regular milk. There's no sugar in standard, unsweetened almond milk. That also means that it cooks a little different. I've noticed that I need to cook the hotcakes a little longer, and I think that's because there's not as much sugar in the batter to carmelize and turn brown. I find that the hotcakes are best turned when the bubbles have stopped, and the edges of the hotcakes look a little dry. You have to be careful though, or the hotcake will dry out on the griddle.
Got to get it just right. 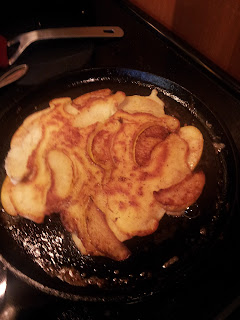 Flipping this thing was a challenge, that's another thing about putting apples in the mix. The apples make the hotcake kind of break up a little, but if you are careful, it can flip. On the bottom side you can really see the difference between hotcake and apple. The apple is brown, not only because it's been on the heat longer, but because the sugar carmelizes. You can taste the difference. Using unsweetened almond milk is a great choice because the sweetness of the apple really pops when you bite it. Now I'm getting ahead of myself...

I cooked the cake a little longer, when I was done, my wife was kind, and allowed me to share have of it with her. I was originally planning on giving her the whole cake, so you now see how excellent my woman is!
After cutting in half, adding a few normal hotcakes, and adding a generous dollop of my ever dwindling supply of Henry Corley made cane syrup, I had an enjoyable meal.
The Randomness: GB Hoyt at 8:00 AM