Anybody Know what this is?

I got this in a "buy it all for 5bux" deal at a hamfest. Appears to be a transistor, has 5 pins on the bottom, 2 grounded to the case. 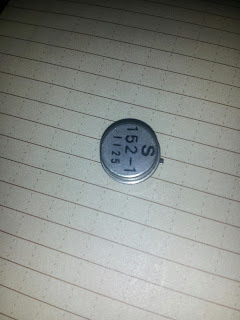 Plenty of Murphy on this adventure.
Where to start...
I got to work about 15 minutes early, and attempted to deploy my End Fed Half Wave antenna. After throwing the antenna into the tree over an acceptable, but not optimal, branch I started to hoist it into place. The antenna hung up about 3/4 of the way to being fully deployed and the support line broke. Because I had to get on the clock, I stopped, and waited until my first 15minute break to finish deploying the antenna. Getting the antenna in the air was easy enough but I discovered more trouble when I tried to tune in a signal.
First, I noticed the antenna was quieter than normal. This could be explained by solar conditions. I was still receiving signals, the band was just less noisy. Then I transmitted, and the SWR was way off. I inspected the line and the transformer. When I looked into the pillbottle holding the transformer, I was in for a shock.

I had to rush it in for emergency surgery.


I cut the bottle open, and used a lighter to get the solder hot enough to flow and reconnect the antenna connection. 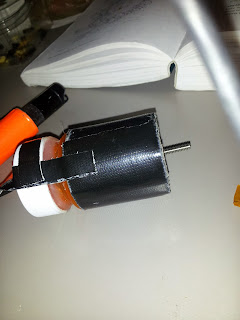 After sealing everything back up with duct tape, I reinstalled the antenna, and made a total of four QSOs. Here's the video account of my WES adventures.
Please don't forget to like the video and share it with your friends!
73,
GB Hoyt
The Randomness: GB Hoyt at 11:09 PM 2 comments: