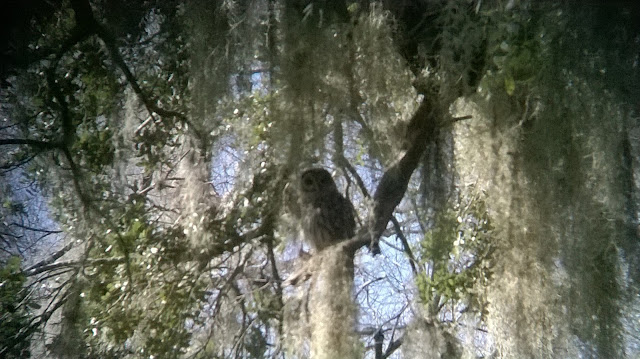 "Barred Owl Permitted to Build"
Not even nature's creatures can escape the long reaching grasp of home owners' associations. Billy the Barred Owl applied for a permit that allows him to build a Cornell Ornithological Laboratory designed nesting box after receiving a notice that his attempts to nest in a natural tree cavity were against his CC&R.
"I'm a wild creature, I'm use to doing what I please," said Billy. "I've nested here for years, but because the best hole faces the neighbors this year, I have to pay somebody to have an approved nest box installed."
Billy's struggle began when his previous nesting tree suffered damage during Hurricane Hermine.
"Hermine, yeah, that storm! Lots of rain, a little wind, I guess the ground got soft, and crash! Over goes my house!" Billy recalled that the storm displaced a family of squirrels he was close to " Yeah, I eat squirrels, but this was a nice family, wouldn't touch them, ya know, we'd get together and watch football, cookout, they went deeper in the woods, I hope they're ok."
Billy's frustration continued when he moved into the Choice Domain* neighborhood, a planned community with many old growth trees.
"Lots of nice ready to use holes in these trees," said Billy when he recalled first moving here. "Plenty to eat running around too, but soon as I found a nice place to nest, I got slapped with a letter. I mean, I understand the rules and all, but hey, it's not like I'm a ham radio operator trying to put up an antenna!"

*not a real neighborhood.
The Randomness: GB Hoyt at 6:39 AM