Fifthly rambuncion!
Fifthly rambuncion pearly man say on the day of the staying homeness.
Off to the west!
Cna I feel a persimmon gimmin to the teeth?
she asks
I find it to be cartoon on the chin to win the grin from within!
respons the lad.
repose and switch scene.
Grasped, said Lady makes way to boat, held tight as a lover by her lover in the boat, she stutters a recollection of breezes, and doesn't want to take five for an answer
This is about the west is it not?
Her lover is in fear, so he asks questions on his mind and heart
This is about us
a sigh and pushes off the bank down the land of glass and earth. up stream the paddling, too far left and it is over the edge, too far right and it nowhere.
Can you see the fishes here?
Eyes ask more about seeing than her lips.
The Randomness: GB Hoyt at 10:57 PM No comments:

Email ThisBlogThis!Share to TwitterShare to FacebookShare to Pinterest
Labels: fiction, stream of consciousness 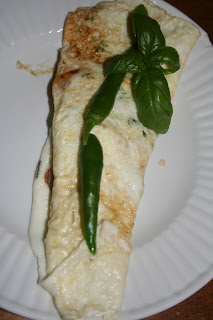 So this omelette was supposed to be presented back in September.
I eh, seem to have misaved the recipe. At one point in thyme, I had written it all out, and all I needed was the picture. Now all I have is the picture.
Here's the only details I can remember.
Omelette is an egg white only style, I used four.  I didn't use butter, I used canola oil to lightly slick the pan.
It was tastey.
I don't remember what herbs/spices when inside besides cayenne (they were all green, btw) and sage. I did toast garlic in the pan before laying the eggs down. The garlic was in the shell of the omelette, not the middle.
Sorry I don't have more than that.
The Randomness: GB Hoyt at 3:24 PM 2 comments:

Walking the Dark Side

Don't tell anybody, but....
since the second week in November...
I've been operating QRO. Not always, but most of the time.
Seriously, the QRPrat has been QRO, 100 watts even.
Mostly on 40m.
So here's the full story: I had been saving some money for a KX3 when I realized that I will probably not be able to just up and save the dough to get one. All of a sudden, on QRP-L, there came listed for sale a Swan 100MX for the right price. I was still a little short, but no worries, the owner hadn't had any interest in the radio, so he would let me put a down payment on the radio to hold it, and pay the rest when I had it.
Awesome! I love this hobby!
In the middle of August, my new old radio came to me, I opened a somewhat damaged box to reveal a damaged radio.  Thank you post office! Specifically, the rear part was dinged, in a manner that looked like radio death. I read the manual and hooked it up to the powersupply without turning it on. No smoke, smells, flashes, or explosions. So far, so good, I hooked the radio up to the antenna tuner, and the antenna tuner up to the 40m dipole I have deployed in the trees. Plugging in the Mic, I turned the knob to click it on, and Behold! There was noise. Sweet glorious noise. The receiver receives.
Peaking the Preselector for max racket on 40m, and making sure the tuner was also at max racket and in power measurement mode, I found a clear frequency, turned the radio to CW Vox (thats how you operate semi-breakin on a Swan 100MX), and made sure the mic gain was set all the way down. I wanted to gently break the news to my tuner that there was going to be some "real RF" coming down the pipe, and not "The Killer Watt" it was used to seeing. I pushed the mic key to produce a sidetone. Tone present, no power out! Just what I was hoping for. If I had power out right now, there would have been problems with the mic gain knob. Hey, this is a QRO rig, but it can be QRP when I want it to be. I began increasing mic gain, hoping to see the power needle move on my tuner...

No Dice.
No transmit.
No cookie, no joy in Mudville.
No DX chasing, no nuthin'...
NO POWER OUT
I was heart broken. I had saved so much, said no to a lot of things I wanted to get just so that I could save for this radio. When I saw the picture of what they looked like, I knew I wanted this rig. There's a guy on the west coast who keeps these things running, and according to him, I'd probably be looking at paying what I paid for the radio to get it fixed (side benefit being a complete alignment from a guy who's job was aligning these things when they were built!), so that option was out of the question for the moment.
Fortunately, the Swan 100MX is a real radio.
Let me 'splain what I mean.
Most people own appliances, not real radios. An appliance is something you use without knowing what's going on inside it. Appliances come with a lot of bells, whistles, capability and performance.
Real radios can have some of this, but most don't. Real radios are about the operator, and what the operator can do both with and too the radio. I'm not downing appliances here, my 2m and up gear is just about garaunteed to always be an appliance.  It's hard to build that stuff well without a precision oriented set up. It's done all the time, but not by me. Appliances tend to be most useful when it's vitally important to transmit information, but when I'm wanting to play radio, I want a real radio.
Popping the top on the rig was a breeze, and I was confronted with a beautiful example of what happens when someone designs a piece of electronic equipment with the expectation that the user will be poking around a bit under the hood. That's another hallmark of a real radio, you can use the radio while poking around in it. Here's a picture of my radio:

﻿﻿
﻿﻿  Notice the simple layout of the radio, Everything does what you think, no menu settings about it.
Simplicity is beautiful, but meaningless if the radio doesn't transmit. I don't have a license so I can listen, I have one so I can talk back! Fortunately, the radio came with a full set of service schematics as well as the owner's manual. each section has its own board, and servicing the radio is as simple as popping open the hood,  finding out where the board you want to work on is, and "fiddlin' until fixed".
Did I say that was simple? heh.
Once I understood the layout of the radio, it became simple, first clear and obvious problem was the large ding on the back of the radio, so I began looking for problems on boards that were somehow attached to the back side of the radio, and I needed to somehow restraighten the chassis a bit. I figured the main problem was that whatever board was attached to the rear chassis had cracked a circuit trace, or shorted a part. I was nervous though because the ding was next to a large heat sink, and large heat sinks usually mean "Final Amplifier Section." sure enough, when I got the covers off, I could see that the finals board was mashed conspicuously against the filtering section. Yikes! Not good. The final amp transistors in this radio are no longer in production, if something has gone wrong with them, I'm beat!
The first thing I decided to do was replace the antenna connector. It has the standard SO-239 on the back, and replacing it was not all that much of a challenge. Replacing it also didn't affect the powerout at all.
GRRRRRRRR.
It was time to take rear off the chassis, and get to the bottom of the finals board.
Getting it all apart was no small feat, I had wires to bend (and break, and then reattach), screws to keep track of (hehe, babyfood jars to the rescue!), and then a schematic to puzzle over.
Things looked a little hinky right where rf entered the finals board. There was a driver and buffer amplifier there that looked all twited up, I'm pretty sure those transistor legs shouldn't be like that....
I poked and prodded with an orange peeler I've modified for use on radios. It's nonconductive, and once upon a time I needed something that could turn shielded inductor slugs, so, I wound up with this thing!
After making sure everything was bent back into place as well as I could get it, and that nothing was shorting anything out that wasn't supposed to be, I applied power to the rig, with the rig wide open. No spoke, no smells, no worries!
Time to see if I can transmit, and......
IT WORKED!
weeeeee!
Having too much fun, I did a little dance!
Now I have a QRO radio in the mix. I wish I had a true power meter, that way I could tell when I am QRP and when I am QRO with the swan!
Time to have fun...
The Randomness: GB Hoyt at 10:58 PM 4 comments: