Last Bloom on the Spike

Here's the end of the Spike for "Choo-Choo Cha-Cha" the Tillandsia simulata growing on the back yard oak tree.

The bloom seems to come straight out of the spike, I don't think there will be any more from this particular spike. I've waited several days now to post these pictures. We shall see.


The next day, the bloom developed into a flower, as all the others have. Bud, then bloom.

Bud then bloom, then die. 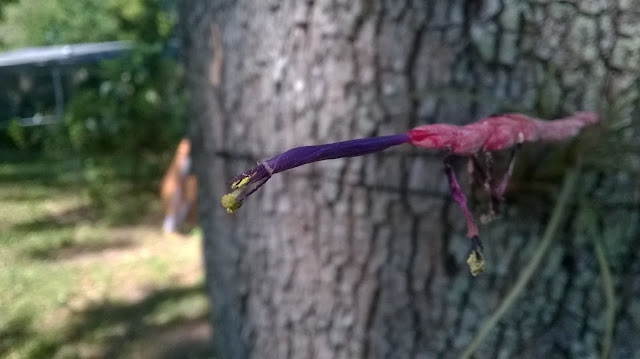 It only takes a day. The next morning, the bloom started drooping. 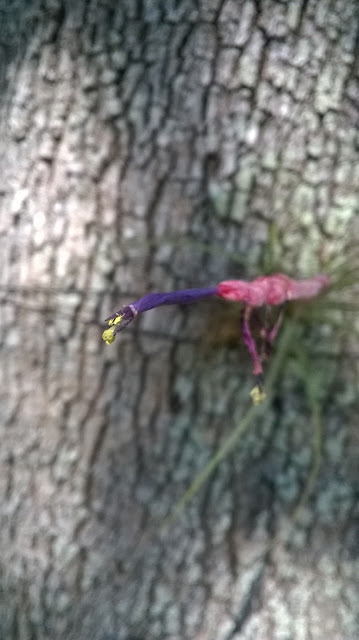 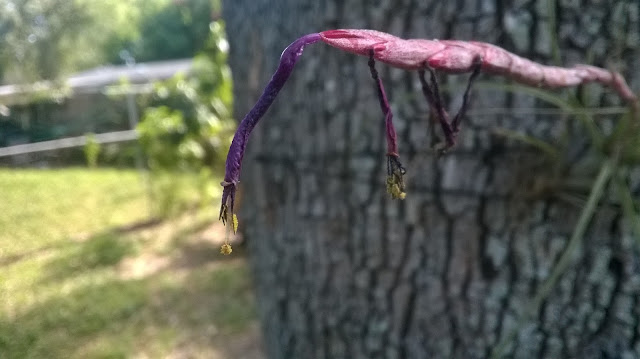 By 4pm, this is what it looked like. I haven't seen any pollinators (hummingbirds or moths) but I think these flowers can and do self-pollinate. Now I begin monitoring for seedpods.
The Randomness: GB Hoyt at 7:37 AM No comments:

If you haven't read about the continuing saga of "Choo-choo Cha-cha" the Tillandsia simulata growing in the backyard, by all means, get caught up. When last we left, four blooms had come and now, is way gone. This is the tale of bloom five.

When bloom four emerged, it emerged along a predictable pattern. Alternate bracts produced blooms, and four blooms in a row had me convinced I knew where bloom five would emerge. I was wrong. Bloom five skipped a bract!
I know the picture above is a little fuzzy. It shows a dried bloom four on the bottom, and a new bloom five, I wanted to see that they were next to each other.


We're getting toward the end of the spike!
Typically, the bloom emerges like this on one day, and blooms the next. Here's what I found the next day.

This is one of my favorite shots of the plant so far. I've learned a lot about how to hold my camera phone, and exposure. I believe I've really pressed the hardware as far as I can to get the best shot I can get from the limited resources I have.

I like how you can see how far the anthers project from the tube. The tube mouth is just tight with all the business going on right there.
These flowers last a day, and then they begin to wither.
Bloom 5 is gone, but at the very tip of the spike, you can see bloom 6 starting, right were it should be, on the terminal bract of the spike.

Remember that conversation we had over twenty years ago about saying "thank-you" to God for the day? Well I found my sunrise over the bridge. My cell phone camera does nothing to capture the grace, majesty and presence of these epiphytes, but I did say "thank you" to The Creator.


The orchid on the left grows on a tree in downtown Lakeland. I'm not sure what it is, my knowledge of orchids is limited, but I am learning. My initial guess is that it is a Oncidium hybrid of some kind. Judging by the growth into the tree trunk, and overall maturity of the plant, I'd say it's been there over a year. The raceme is awesomely long, at least 40". I haven't counted the blooms. I just noticed it the other day while on a post lunch walk at work. The yellow flowers are mottled with brown.

This beauty on the right is most certainly a Phalaenopsis hybrid. I care for a couple at the house, one was a Lowe's clearance cart special. No flowers, half dead, and all the potting material was bone dry. There was one root still alive. It took about a year, but it bloomed. I'll write about it another day. This particular plant grows on the same tree as the first picture, on the opposite side. Faces West. I don't think it's doing as well, but I am also nearly certain that this isn't the first bloom spike for this plant.

This plant is on an adjacent tree, it's the same species as the first picture, only larger, and it has more flowers. The over all effect is amazing.

I don't know who put these plants here in the trees, but I am grateful to see them. They weren't born there, but they are doing the best they can where they were put. That's the lesson they're teaching me. How about you?

The Randomness: GB Hoyt at 1:07 PM No comments:

Only thing I haven't run, is one up a kite, and I've got plans on doing that one day.
I have a shack logbook (Don't you?), and while not every quibble I do in my shack gets recorded into the logbook, one thing that I always try to do is record the tuner settings for the W3EDP currently deployed in the backyard. The W3EDP remains true to its tuning, generally, if I write a value down, I can switch bands and come to that setting later.

Doesn't work all the time, but it works often enough. Take the time to notice that where you are in the band affects the tuner settings, but not overly drastically. For instance, on the date of 31 October, 2015, the setting for 3.930 was "5/6 H 3/4" That means between 5 and 6, closer to 6, H, between 3 and 4, closer to 4, but only slightly. On 11 November 2015, I went to the bottom of the band, 3.505, and the settings were similar, 5/6 H 2/3. I expected this change. Sometimes I experiment with different settings on purpose, hoping to get a better signal. You see this especially on my settings for 20m. On 30 October, I had the tuner set to /6 B /4. That indicates "Touching the left edge of 6, B, touching the left edge of 4". Typically, when using the W3EDP, this is the go to setting for most of 20m, but sometimes the tuning can be touchy. I experimented with the vertical antenna I have for 20/15m. I wanted to find a tuner setting that was close for both, and was pleased with the results (See settings for dates 16 Dec 2015).

The W3EDP currently deployed in the backyard is built of bare "silky wire." It seems to weather well in Florida weather, and I can detect no adverse performance characteristics, despite some apparent corrosion.

I've also built it using Radio Shack outdoor grade speaker wire, bare #14 antenna wire (wireman #511), and Flexweave. I'm torn on whether I like Flexweave or Silky better. I will say that using #14 antenna wire seems to be the best if you are going to use it in a permanent setting, as long as you won't have it touching trees, buildings, etc. One change I might make to the setup I'm running now is to the tuner.
I think I want to create a dedicated tuner, but I need to do some analysis on the antenna, maybe model it out on different frequencies, sweep through the bands. I've learned some interesting things about modeling while planning an antenna that performs well on bands that don't do well with the W3EDP. That means I'll have to change my model, but because I've learned something, I don't mind so much.

Anyway,
That's how things are going currently with my W3EDP. I haven't made many QSOs yet in 2016, but I do promise some more interesting antenna posts soon in the future! I'm working on building an antenna to work around the pesky tuning problems I seem to have with the W3EDP on the WARC bands, notably on 30m and 17m.
73 es HV FN,
GB Hoyt