This is Part 2, Part 1 is HERE.
So I completed my Dummy load late Saturday Nite, early Sunday Morning. Here's how it went down.

I started with the dummy load, and added two wires to it. I decided to keep traditional colors to indicate which side goes where, think red positive, black negative, red goes to the center pin of the UHF connector, black to the ground side. In the picture on the left, the parts are (left to right) dummy load, UHF connector on jar lid, and Jar. Some folks put theirs in a paint can, but I put mine in a glass jar so as to see my handiwork. The jar is "recycled" (repurposed?) from our pantry. Coconut oil came in it originally. 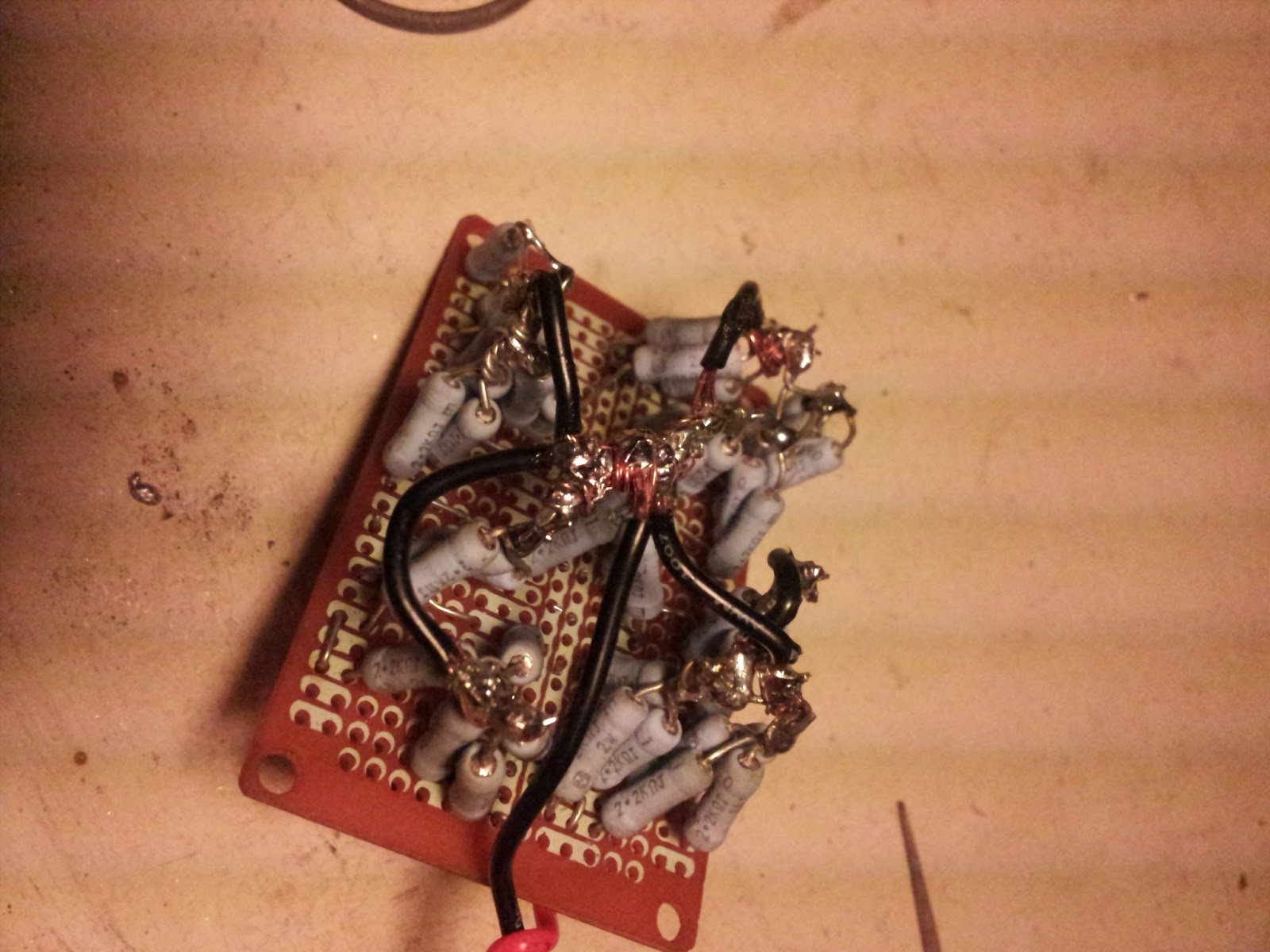 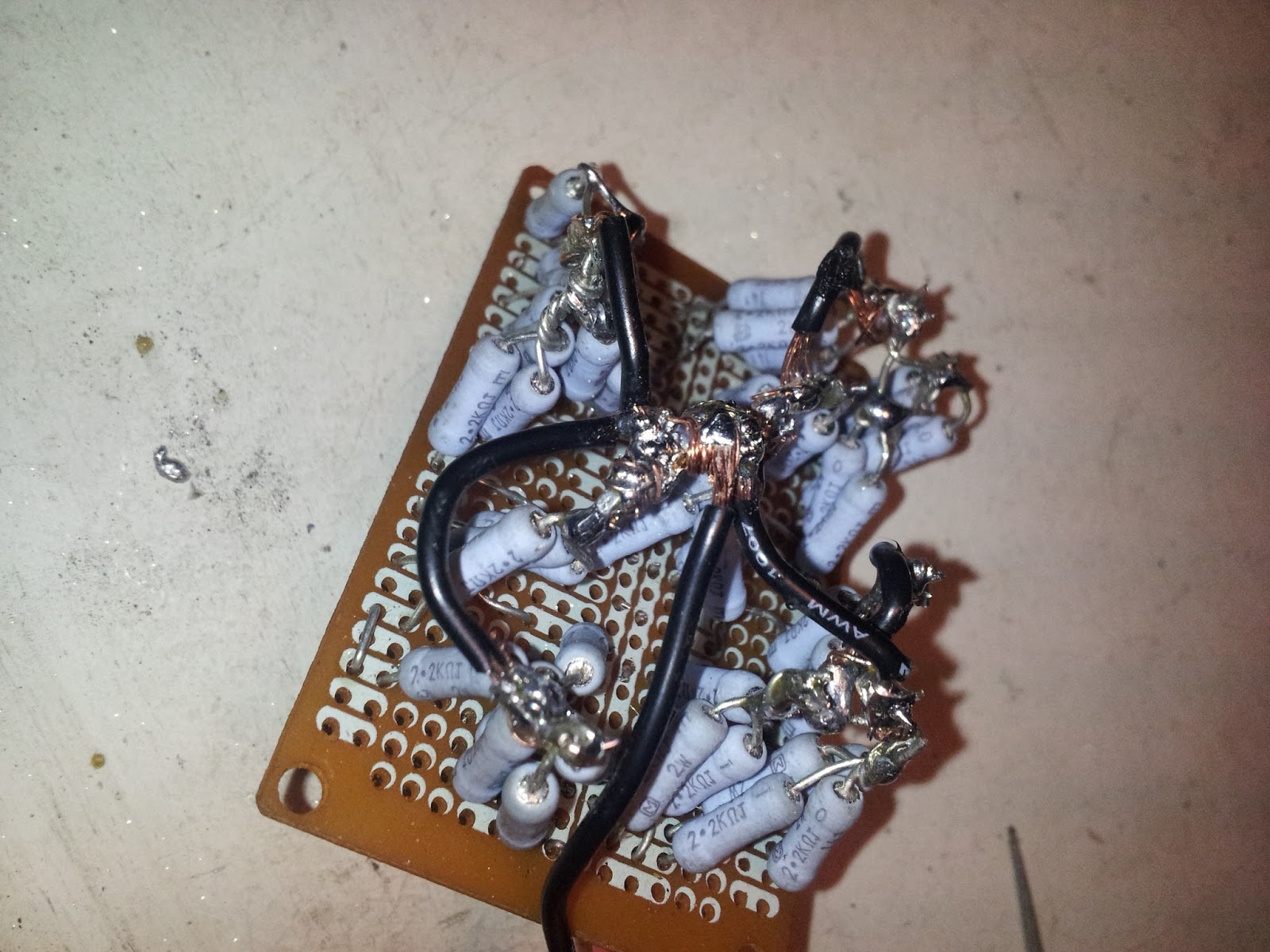 Here are some closeups of the dummy load itself. They are as good as my phone camera could take :D 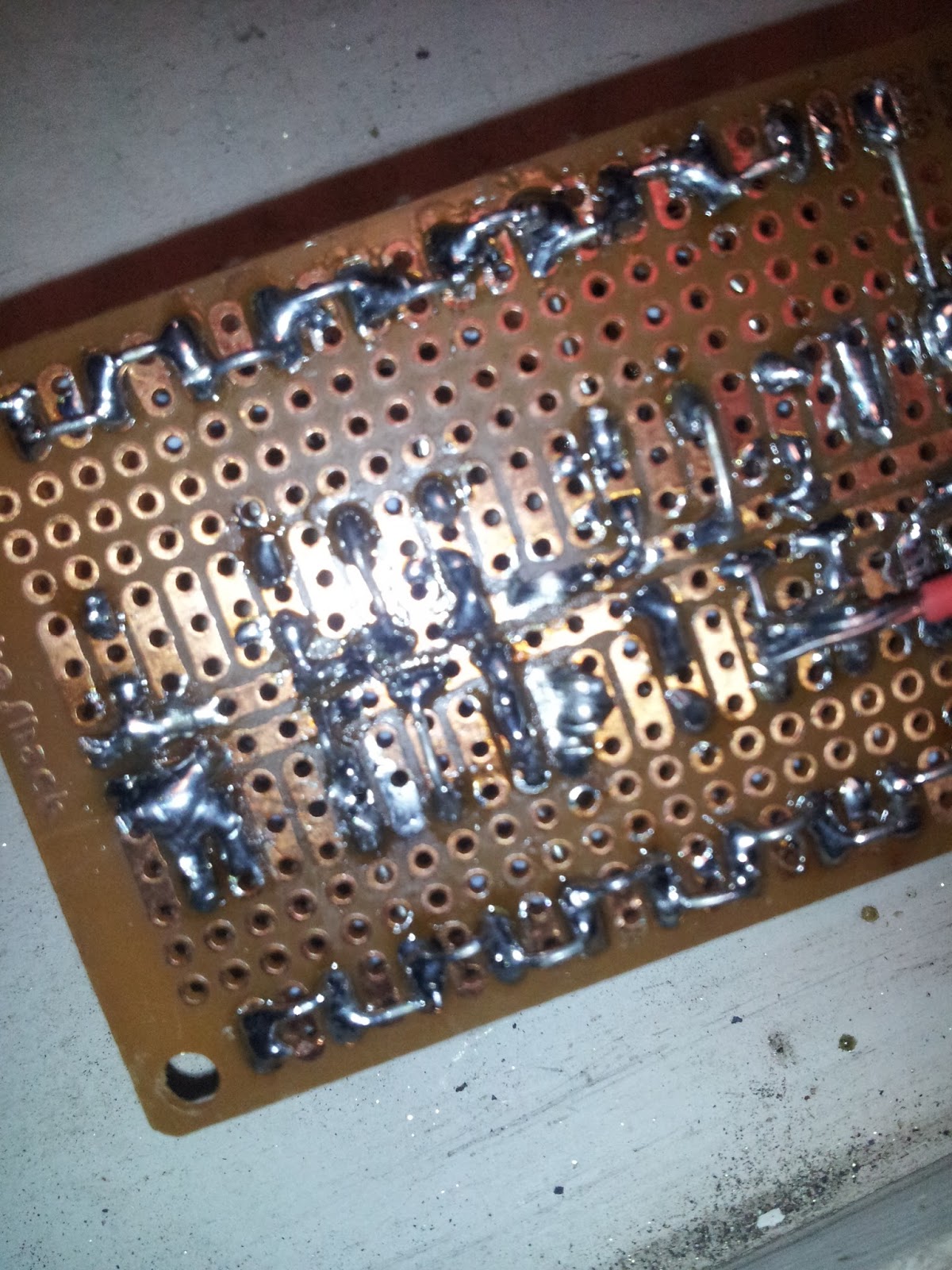 The underbelly is equally attractive. You can't really tell, but the pads are jumpered together using the resistor leads. I would pull the lead through one side and thread it through a hole two pads down to give the resistors up top space.

I attached the UHF connector to the top of the lid by drilling a hole in it, and rolling a lip onto the edge. It felt pretty snug once I got the connector fully seated on top. It was easy to hold the connector in place and use a 1/8 inch drill bit to drill out two of the holes for mounting screws. I searched in my junque drawer for the hardware, and settled for some bugle headed machine screws that fit down in the screwhole for the connecter. I also drilled out a hole for the ground wire to come up through. I wanted to be able to solder the wire to the top of the connector. Here's how it looked:

After threading the ground wire through the hole to the top of the connector, and soldering it down, I soldered the red wire to the center pin of the connector on the underside. Before I put mineral oil in it, I wanted to make sure it was a 50 ohm resistive load. So I grabbed my trust $4 Volt Ohm Meter and started poking it.

﻿
﻿
Yep, it works! I put mineral oil in the jar and sealed as tight as I could. Rechecked resistance, and it works!

﻿﻿﻿﻿
Of course the real proof was in the measurement of forward and reflected power. The only accurate and calibrated meter I currently have is my trusty NoGAwatt QRP ﻿﻿﻿﻿SWR/Reflectometer. I grabbed it, and powered up the SW-20 and the Killer Watt Radio. At 20m, there is no reflected power, neither does it reflect power at 40m. When I hooked it up to the 2m radio, though, there was beaucoup reflected power, my lil' Diawa crossed needle setup on that band indicated an SWR of 5:1. I wonder how much of that is due to poor construction technique.
﻿﻿﻿﻿
﻿﻿﻿﻿
﻿
﻿

Behold the Final Product in all Her fullsized glory!﻿﻿﻿
﻿﻿﻿All that's missiing now is a label that says "World's Ugliest Dummyload" or something.

I built something like that at The Ohio State University station, W8LT, about 55 years ago. But I used water, not mineral oil. I didn't test it any higher than 14 MHz. Worked fine. I think I used a bunch of 2 W carbon resistors in parallel.

Water, heh! I would think that over time, water would lower resistance. These resistors are Metal Oxide, and 2 watts. I like how they have the resistor value printed on them, although it's touchy when you have a couple of resistors in the mix that aren't the same value. Having color codes is very handy then.

We threw the water out after using the dummy load, and then added new from the tap the next time we used it. Mineral content was low so it didn't lower the impedance measurably. No doubt it added a bit of capacitance in parallel with the resistance, but not enough at 14 MHz and lower to matter. These were carbon resistors; I wouldn't try water with metal ones.

That is pretty ugly! Now, to make the project complete, you should publish the schematic. I assume that you could make that equally as ugly. A napkin might be a good place to start.